Our Cana Brava Records shop is located in Pelourinho — old Salvador — on Rua João de Deus — John of God Street — named for one of the leaders of a rebellion with multiple names (Revolta dos Alfaiates — Revolt of the Tailors, Conjuração Baiana — Bahian Conjuration, a conjuration being the production of magic by incantation) which took place in 1798 and ended with João de Deus’ hanging in Praça da Piedade (Pity Square). This rebellion was inspired in the French and Haitian Revolutions and aimed for the establishment of a Republic of Bahia without slavery and with equal rights and opportunities for all.

But the street’s original name was Rua Maciel de Cima — Upper Maciel Street — named for the manor house down at the end of our street. Which was named for owner José Sotero Maciel de Sá Barreto. It’s quite a place. 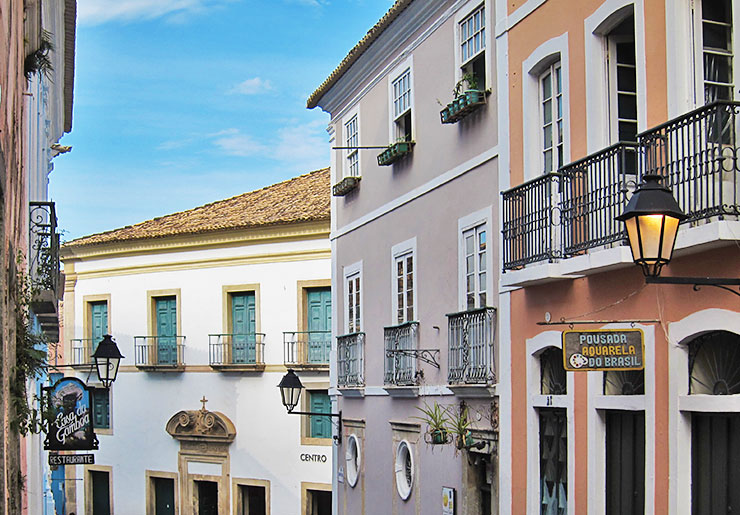 Back then, when the house was home to the Maciel family and shelter from the elements for their slaves, rather than the two streets which now emanate from the front of the house (the other one being Rua Gregório de Mattos, formerly Rua Maciel de Baixo, Lower Maciel Street) there was a quinta, a yard as Americans would say, or garden in that sense to the English.

Over time the streets were carved out and houses built along either side of them; big, beautiful houses for the extremely well-to-do.

And as time is wont to do it continued to roll on…and the rich moved out, and the less-so moved in and then out and eventually — at the end of the 19th century — these houses became brothels within an area known for such and denominated “Maciel”. This was where Dionísia de Oxossi lived, in Jorge Amado’s novel Dona Flor and Her Two Husbands, where Dona Flor came in search of the woman she suspected her husband of having an affair with, whom Dona Flor found to be living in the most degrading conditions. It’s also where, in the Jorge Amado novel Tent of Miracles, Pedro Archanjo’s (Peter Archangel) friend Ester was madame of a house-of-women. And where in the Jorge Amado novel Tereza Batista Tired of War Vavá was a successful pimp, who came to own a house with a commercial dry-goods downstairs and prostitution up.

With all this, it’s also where Dorival Caymmi’s grandfather lived when Caymmi was a boy, and where Caymmi spent those happy childhood times (on our street Rua João de Deus/Maciel de Cima)…

It was almost certainly to this area — for this was in an unofficial sense Salvador’s Storyville — that surviving women of the massacre called “The War of Canudos” were brought and forced to work as prostitutes…selected from among the 150 or so survivors of what had been 25,000 — or maybe it was 15,000 — followers of Antônio Conselheiro — the Prophet of the Sertão, backlands. To the victors go the spoils.

Many of the soldiers culled likewise from the harsh backlands of the Brazilian nordeste — Northeast — at the “war’s” end, had nowhere to go, nowhere anyway that didn’t offer parched land and scrub and cactus and the bleached bones of cattle dead from hunger and thirst…and these ex-soldiers headed for that enchanted magnet in the south: Rio de Janeiro.

But there, for them with next to no money, there was no place…so they made their own on one of the hills: Morro da Providência (Hill of Providence). This was the beginning of the now famous — or infamous depending on how you look at it — favelas — ghettos — in Rio’s hills. Outside of Canudos is another set of hills, one of them called for a plant ubiquitous there: favela. This name came to be informally applied to the Morro da Providência, and I suppose one might not unreasonably assume that some of the residents of the new Favela were originally residents of the original. Whatever the case, “Favela” eventually became “favela” and these favelas are currently home to millions.

During the twentieth century the soundtrack to life in the favelas was samba. The music fulfilled the same spiritual function that it fulfilled on the sugarcane plantations of Bahia: lift the spirit and the body too while you’re at it. Samba was elegance in lives which had little of it. The samba is still there now, having lost space to funk carioca (a “carioca” is somebody from Rio), not a lifter of the human spirit rather a blight upon it. But real samba is so entwined in Brazil’s DNA (at least that within the Rio de Janeiro – nordeste axis, what most non-Brazilians think of when they think of Brazil) that it’s there like a guardian angel people are unaware of.

From the Bahian backlands to Maciel to the favelas of Rio…samba is Brazil’s Balm of Gilead. At Cana Brava on Rua João de Deus, we’re proud to be something of a nexus for it.