The word is derived from the Yoruba “agbada”, which in Africa meant a long robe of the type worn in Islamic countries (or areas). In Bahia, “abadá” had assumed its present linguistic form by the early 19th century, but its association with capoeira and Carnival still lay a century in the future. It denoted at that particular point in the past a long, flowing, white robe, a manner of dress expressly forbidden on the streets of Salvador and which would not be seen in public until the Malês were to rise up in revolt against their enslavement. 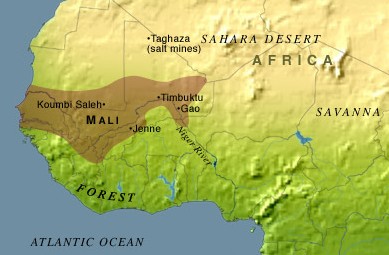 Another short digression: The Mali of today is an impoverished African republic, one of the poorest countries in the world (with an amazing musical culture). But at one time there was a vast Mali empire sustained by commerce in gold and salt, with Timbuktu as its principal city. “Mali” is derived from the Yoruba “imale”, or “Muslim”, a reference to the empire’s religion. The part of the empire encompassing part of what is now northern Nigeria was the provenance of the Malês of Bahia.

And yet another digression: The Lavagem do Bonfim is a huge yearly festival which takes place in Salvador during the month of January, but in 1835 it was only one in a cycle of religious festivals, and it was during the early morning hours of January 25th, during the festival of Nossa Senhora da Guia (Our Lady of the Guide), that the Malês planned to attack.

Maybe there was confidence born of language, a feeling that loose talk in Nagô (the then local term for Yoruba) was safe. This was a mistake. Talk of the insurrection down at the pier, and of its leader Ahuna, reached the ears of a freed Nagô by the name of Domingos Fortunato. Domingos engaged someone to write down what he’d heard and had the letter immediately delivered to his ex-master, Fortunato José da Cunha. Sr. da Cunha apparently didn’t take the threat seriously.

Shortly later Domingos’s wife Guilhermina — also a freed Nagô — was standing at the window of their home on Rua do Bispo (a side street which runs into what is now Praça da Sé) when she gathered from the talk of several passing Nagôs that at the sound of the 5 a.m. alvorada (a wake-up chant sung in the street, when slaves were to rise and fetch water from the fountains) the revolt would begin.

Guilhermina went straight to her ex-master — Souza Velho — and told him what she’d heard. And she wasn’t finished.

On her way home she was met by her friend Sabina da Cruz. Sabina had had an ugly fight with her husband — Vitório Sule — that morning, and upon arriving home after work (she sold food in the lower city) she saw that Vitório, together with his clothes, was gone. The distraught woman set out to find the father of her children, finally managing to locate him in the basement of a house on the Ladeira da Praça where he was crowded in together with 50 or 60 other men and some sort of leader (basements of this sort were referred to as armazens — storage areas; they were the undivided, unfurnished, and poorly ventilated living quarters of city slaves, the master and his family living on the floors above).

Guilhermina passed this new development on to her neighbor André Pinto da Silveira, who had in his salon at that very moment two important visitors with government connections. The government palace was informed and at one a.m. a team of armed men entered the house on the Ladeira da Praça. The revolt was off to an early start.

Vitório Sule was one of the first to die. The crux of the matter now was to unite forces, and Malês ran from house to house, beating on doors to wake up and alert their colleagues. As this was happening the main contingent moved up the street to the Câmara Municipal (city hall), where esteemed Malê leader Pacífico Licutan was being held prisoner in the jail beneath the building.

Caught in crossfire from the câmara itself and from the governor’s palace across the street (now the Palácio Rio Branco), the Malês were forced to retreat. They moved on, skirmishing along the way, moving to reinforce their numbers with a sizable contingent of Malês coming from the neighborhood of Vitória.

Their trajectory eventually took them past the Largo da Lapa (Salvador’s Colégio Central is located on this spot now) where another skirmish took place, and eventually down to the cidade baixa (lower city). The idea was to make their way to an area called Cabrito (today a poor neighborhood; “cabrito” denotes a small goat or — perjoratively in Brazil — the offspring of a mulatto and a negra, or vice versa).

Here in Cabrito the Malês of Salvador were to meet up with Malês of the Recôncovo region (the land surrounding the bay) and together they would establish themselves somewhere on the bay’s far side.

It’s not clear what their intentions were after this; a couple of marginal participants are on record as having said the the Malês intended to take Salvador. But the Malê leaders were intelligent men, some of whom almost certainly had experience with military campaigns in Africa before being apprehended and shipped off to Brazil, and they undoubtedly would have wanted to know what kind of force and organization they would be facing before launching what could be futile attack.

This now was the most dangerous part of their trajectory — with the sea to the left and high cliffs to the right — the men had to pass the Quartel of the Calvary — and the calvary was ready. The Malês were charged, scattered, chased and hunted down down by a superior force of mounted soldiers, and this effectively was the end of the Malê Revolt.

It was also the beginning of the repercussions. It’s important to note that during the three hours of the revolt itself, not a single citizen who was not a part of the constabulary or armed forces was harmed. There was no looting, no wanton violence. With the exception of one house set fire to by the slaves escaping it, nothing was damaged.

But in the aftermath of the revolt, violence, beatings, hysteria and murder — directed against innocent Africans — ruled. Much, although not all of it, was at the hands of soldiers, so much so that commanding officers were afraid of a serious breakdown of order in the ranks.

On May 14th, 1835, four leaders of the uprising were shot dead by firing squad in Campo da Pólvora (in front of where Salvador’s forum, or courthouse, stands today).

Sixteen participants were sentence to between 5 and 20 years of prison.

Eight participants were sentenced to perpetual forced labor (although some sentences were eventually remanded at the requests of the slaves’ masters).

Thirty-four participants (all freed slaves) were deported to Africa, probably Nigeria or Dahomey.

And forty-five participants were sentenced to be whipped at the post (Pacífico Lutan received a sentence of 1,000 lashes).

These whippings were not like the movies, where a person is flogged maybe ten or twelve times. The number of lashes meted out ranged from 250 to 1,250 – at a rate of 50 per day until the total was met.

As one might imagine, wounds and sores became infected, ulcering and festering, and the beatings went on nevertheless, day after day, until the lesions became life-threatening. Only then was punishment was temporarily halted in order to give the castigated time to recuperate, before the lashing would again be renewed. Sometimes the slaves never did recuperate.

In any event, the uprising of 1835 was the last in Brazil, but it wasn’t the end of the resistance.

For a wide-ranging and scholarly description of the Malê revolt I recommend the excellent Rebelião Escrava no Brasil: A História do Levante dos Malês (1835), by João José Reis (available in English as Slave Rebellion in Brazil: The Muslim Uprising of 1835 in Bahia). My source for the very condensed narrative above was the copy of the book in Salvador’s Biblioteca Central.